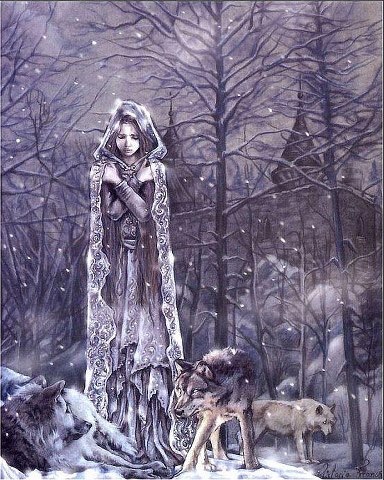 ”In wisdom there is gentleness. There is softness. There is silence. Deep within all of that lies a strength and a will which is stronger, clearer and shining more brightly than any Diamond Of The Snows ever perceived.”

She walks beside me. Her scrawny, white legs moving as if in twilight-time. Paws barely touching the ground as they shift. It as if she floats. As if she makes the space around her move as her body graciously motions through the very same air touching my face, my nostrils, while at the same time inhabiting two dimensions.

I have been told a long, long time to use my gifts. To stand on two legs, rooted in each dimension simultaneously. I have been struggling with grasping the practicalities of it. She is showing me how by just being who she is and doing what she is supposed to do. There is no doubt about her having a purpose. Ever. There is no doubt about her following her purpose. Ever. She just does it because her heart is anchored strong and her nose is pointing in that direction.

I remember the little child born into confusion. The little child who believed in the light of the world, in the diamond in the heart, in the nose pointing in the direction the diamond mapped out. The girl who came in to this world with a purpose so strong it was too much for her parents to handle. They did not know where to place this life-bubble, so it was easier to forget her. Easier to push her gifts away, to hide under the strife of daily life, to lose her just like they had lost themselves a long time ago.

This strong, beautiful, white wolf with the constant following of a fox pup had been there all along.

”Yes”, she says. ”I have been watching from a distance. From a mountaintop within. You needed to climb quite a few mountains to meet me again, but Fox has always been there. Through bushes, rivers, sandbanks, rocky roads, gold paved streets, avalanches, waveriding on the ocean, sleeping, waking, sleeping and waking again”.

”In honour of the two of us!”, I find myself gasping while smacking myself on the forehand with the palm of my hand. ”Duuuuuh! That was it all along!”